The Dhivehi Version of Mancala?

The Dhivehi Version of Mancala? 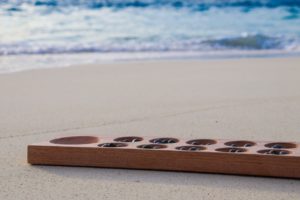 We’ve all either played or seen someone play ‘laagulha’ or ‘ovvalhugondi’ at least once in our lives. Be it in our childhood, when it was a lot more common, where we’ve seen our mothers, aunts and sisters play the game or maybe even now, when we see the younger generations touch the wooden board. Although the latter may seem a rarer sight, the age old game of ‘ovvalhugondi’ has been a well-integrated part of Maldivian culture and history. However, did this simple game originate right here in the Maldives? Or did it come from someplace else altogether?

Mancala is a generic name for a family of two-player turn-based strategy board games played with small stones, beans, or seeds and rows of holes or pits in the earth, a board or other playing surface. The objective is usually to capture all or some set of the opponent’s pieces. Sound familiar? Mancala is now a global name, a game played all over the world. There are even online versions of the game. ‘Ovvalhugondi’ in the Maldives is just a variation of this, with the main objectives and game equipment being mostly the same, with some minor differences in the number of pits and the number of stones/beans used in play.

It is speculated that ‘ovvalhu’ takes after the variations played in South India or possibly even Ghana. ‘Ovvalhu’ may not be our national game, but Ghana’s variant called, ‘Oware’ is supposed to be their national game. The familiarity of the names may just be coincidence, or it may indeed turn out that there is a correlation between the two versions as the ‘laagulha’ (the seed of the tree, ‘Kashikumburu’), us Maldivians use to play ‘ovvalhugondi’ with is also the supposed pieces used in ‘Oware’.

Most mancala games share a common general gameplay. Players begin by placing a certain number of seeds, prescribed for the particular game, in each of the pits on the game board. In the case of ‘ovvalhugondi’ four seed pieces, usually ‘laagulha’ are put into the 16 holes (excluding the larger holes used as banks) on the wooden game board. A player may count their seeds to plot the game. A turn consists of removing all seeds from a pit, placing one in each of the following pits in sequence and capturing based on the state of the board. The objective of the game is to plant the most seeds in the bank. Once a player ends his/her turn in an empty pit on his/her own side, he/she captures the opponent’s pieces directly across. Once captured, the player gets to put the captured seeds in his/her own bank. After a capture the opponent forfeits a turn.

Although ‘ovvalhu’ may be derived from a game that is now recognized worldwide, the differences and uniqueness of our game will still be ours. Here at MvLacquer we are always looking to bring authentic and rich Maldivian experiences to our customers. Our ‘ovvalhugondi’ comes with either the regular 16 hole board or for a smaller experience, you can opt the 12 hole board. We also sell cowry shells and ‘madhoshi’ in addition to the usual ‘laagulha’ so that you can have a memorable and refined traditional game at leisure.

No products in the cart.

No products were added to the wishlist.